Convocation ceremonies at Capilano University feature several traditions unique to our institution. Open the areas below to learn more about what makes CapU Convocation special.

Symbolism of the Coat of Arms 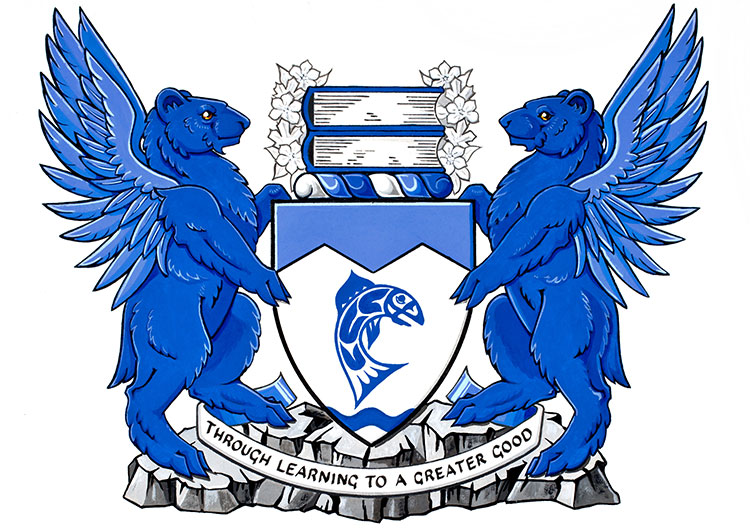 The main part of the shield is white, depicting a salmon.

Salmon are an important feature of local wildlife, and are shown here in the artistic style of the original inhabitants of the North Shore area.

The waves at the bottom of the shield indicate the University’s location near the Pacific Ocean and the top section represents the nearby Coast Mountains.

Two books with blue binding and white pages are stacked with their bottom edges visible. On either side are several maple leaves and dogwood flowers, all in white.

This is set on a wreath of twisted cloth in white, light blue and blue. The books are a traditional symbol of education and the arrangement is inspiredby the corporate emblem used when we were Capilano College.

The maple leaves and dogwood flowers make reference to the fact that the University is located in British Columbia, Canada.

A bear in blue with light blue wings is depicted on each side of the shield. Each bear stands on a rocky base.

In local First Nations mythology, bears are symbols of strength and are a link between the natural and supernatural realms.

In medieval bestiaries, bears were said to give shape to their own young and, therefore, bears represent the ‘forming’ of the young—a metaphor for education.

The wings refer to the idea of aspiration and can allude to ravens, another local creature immortalized in First Nations mythology, associated with intelligence and creativity.

The rocky base refers to the nearby Coast Mountains, which are a dramatic aspect of the local landscape.

How Capilano University Got its Name 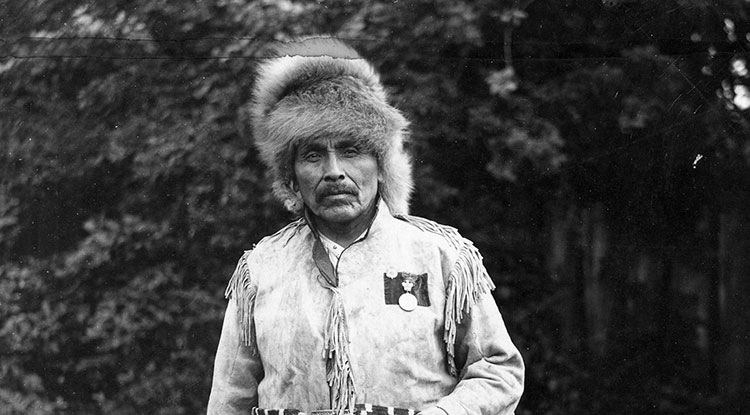 In 1968, residents of the North Shore submitted names for the newly-formed regional college operating on the grounds of West Vancouver Secondary School.

The name Capilano was selected to honour Chief Joe Capilano, a well-known Coast Salish carver and spokesperson on history and culture and advocate for education.

Born in 1850, Chief Capilano was a respected leader and chief of the Squamish Nation (Skwxwú7mesh). Skwxwú7mesh is a reference to ‘people of the sacred water,’ as the Squamish River was well known for its curative qualities.

In 1906, Chief Capilano led a delegation of B.C. chiefs to England and met with King Edward VII. While there, he was introduced to Canadian poet, Pauline Johnson. They became good friends, and after she moved to B.C.’s West Coast, Chief Capilano shared his legends, which she later recounted in her books and poetry.

Capilano University’s chancellor and vice-chancellor robes are based on traditional academic ceremonial gowns.

The chancellor’s gown is black brocade with a woven dogwood flower motif, trimmed in gold brocade and edged with royal blue silk trim.

The dogwood is British Columbia’s official flower. The four gold bands on both the upper and lower gothic sleeves represent Capilano University’s four decades as a college, before becoming a university.

The vice-chancellor’s robes are in the same black brocade with the dogwood motif, trimmed in silver brocade and edged with royal blue silk.

The robes were designed by Jane Still from CapU’s Costuming for Stage and Screen program in the School of Motion Picture Arts. They were built by Deborah Gyug, a master of costume construction. 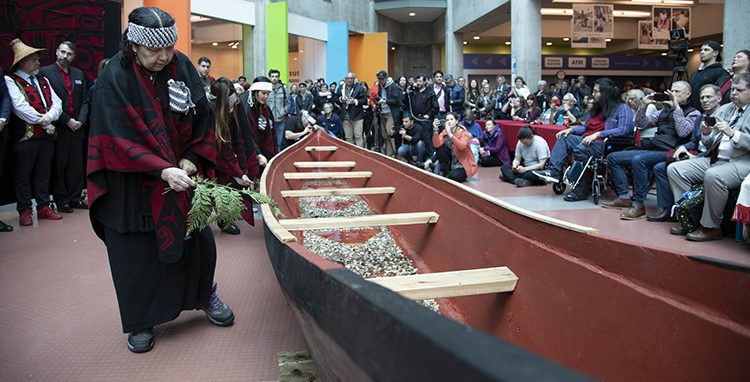 In celebration of our 50th anniversary, Capilano University commissioned Squamish Nation master carver Ses siyam (Ray Natraoro) to build a traditional Coast Salish canoe as a legacy to future generations and a symbol of the University’s commitment to Truth and Reconciliation.

The 30-foot-long seaworthy canoe, named Skw’cháys in the Squamish Nation language, was carved at the North Vancouver campus in the winter of 2019, giving students, employees and the community the unique opportunity to witness the transformation from tree to canoe and learn firsthand about Coast Salish traditions and culture.

The canoe is present at Convocation as a physical reminder of our students’ journey at CapU and for all the journeys they will take in the future. 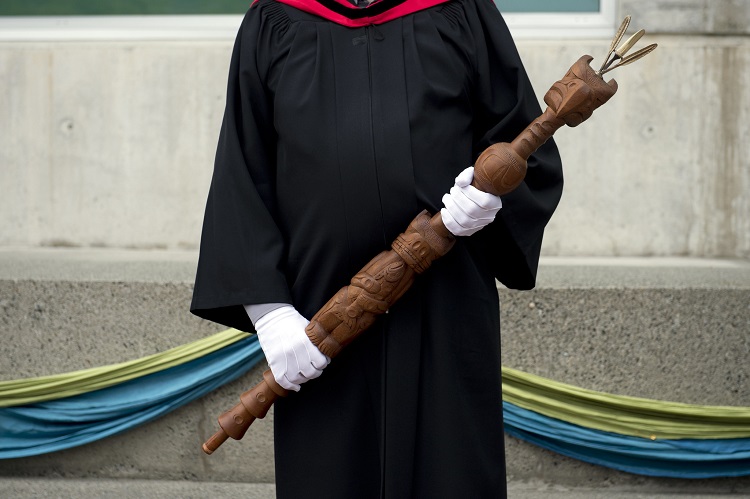 The mace depicts the authority vested in the University to grant degrees, and also incorporates the history and tradition that surrounds both the territory near our regional campuses and the vision of Capilano University.

The mace’s design portrays the unique territorial qualities of our region, which extends from Deep Cove to Mt. Currie to Earl’s Cove on the Sunshine Coast.

These qualities include reference to the animal world, to the landscape, to directional symbolism and to the human element.

The mace is carved from yew, which is a natural wood found in our region. Responsibilities for bearing the mace originated in the office of the Bedellus or Beadle and date back to the University of Glasgow, which was founded in 1451.

The function of the Bedellus was to keep the students in order and, on the days of public functions, they arranged the seats for dignitaries.

The duties of the Bedellus have varied greatly over the centuries. In the 17th and 18th centuries, the incumbent was required to regulate bonfire settings and purchase university supplies.

Officially, the Bedellus is responsible for administration of the university’s facilities. The most prominent role of the Bedellus was, and continues to be on ceremonial occasions, leading the academic procession and carrying the university mace.

In 2020, our ceremonial mace will be carried by Stephen Williams, Vice Chair of the Capilano University Senate.