Is this your first Convocation? Click on the items below to learn more about the Convocation ceremony at Capilano University. 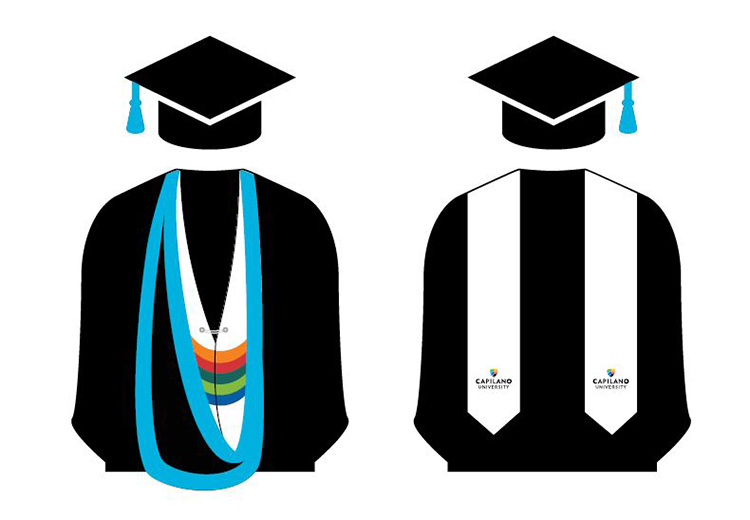 The cap and gown are traditional regalia each university student dons to mark the milestone of their achievements.

Why a cap and gown?

Academic regalia dates back to medieval times when university studies were often held in cold, unheated churches and the robes were worn for warmth.
The monks would often have their heads shaved in the traditional tonsure (shaved head for humility). Therefore, the hoods were necessary for warmth, as well.

The hoods were later replaced by skull caps, which we now know as our classic mortarboard. In the 19th century, the hoods and robes began to take on various colours and styles to indicate level and area of study.

This year, Capilano University is proud to introduce its new institutional hoods and stoles. The new hoods are worn by bachelor’s degree graduates and have CapU’s five faculty colours on satin lining along with Capilano University’s primary brand colour, cyan blue, on the trim. These hoods are worn by all bachelor’s degree graduates, regardless of program.

The new stoles are worn by diploma or certificate graduates, and they feature CapU’s logo. All hoods and stoles are worn over the traditional black gown and are accompanied by a classic mortarboard with tassel.

Gonfalons are banners suspended on a crossbar. They are one of the traditional components of academic ceremonies that lend colour and dignity to processions and stages.

At Capilano University, gonfalons are used in the Convocation ceremonies and represent each of the University’s five faculties:

The gonfalons are carried by “gonfaloniers.” The gonfaloniers are students who have been selected by their respective faculties for their outstanding academic accomplishments.

Leave us a memento of your time here by pinning your dreams to our dream catcher located under a tent on the walkway to the Birch Building.

We ask that guests remain in their seats for the ceremony and let the professionals capture these important moments.

Following the ceremony, you are invited to a reception in the Birch Cafeteria, across from the Centre for Sport and Wellness.

Light refreshments will be served, with music provided by Pearl Jig.

In the Birch Building and the Centre for Sport and Wellness, you will find a number of services including: